After discovering some fishing nets on the quayside in Appledore, North Devon, I became interested in the history and decline of salmon netting and by how little evidence remains of this once thriving industry.

This project celebrated the last few remaining fishermen who are still salmon netting today on the Taw and Torridge estuary.

Leather-hard textured and impressed slabs of stoneware clay were used to make a series of vessel forms. I worked intuitively allowing for energy and movement to come through the forms; two aspects I wanted to capture to reflect the movement and energy of water in the Taw and Torridge estuary and the seine fishing boats moving up and down as the fishermen ‘shoot their nets’. 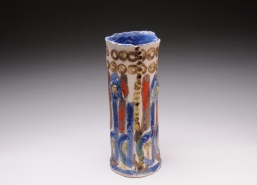 The vessels were covered in layers of rich creamy white slip and then bisque fired. A base glaze stained with different colour oxides was used to decorate the vessels, producing a glorious explosion of deep vivid blues and greens mirroring reflections on the water.

Quick, bold brush strokes reflected the sounds of the oars splashing on the water and the fishermen’s spirits as they salmon-netted out on the estuary. The vessels then underwent a second, low temperature glaze firing.